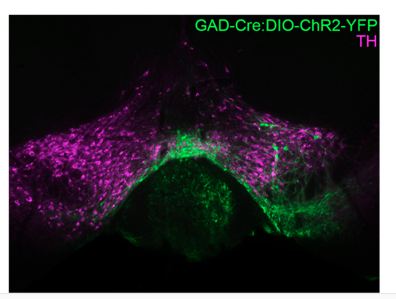 A particularly interesting behavioral finding that explains many aspects of nicotine use and has been confirmed in human subjects, is that rats will press a lever for nicotine and press a lever to receive a mildly reinforcing cue but will exhibit a much more than additive number of lever presses for nicotine and the cue together. This, coupled with the fact that nicotine does not result in the same ‘high’ elicited by many other drugs abused by humans, has led to the idea that one of the primary factors driving nicotine addiction is its ability to potentiate the value of other appetitive stimuli and to accelerate cue-reward learning. We are investigating two, potentially interacting, circuits that increase responding for rewards and reward-paired cues. While DA neurons are the dominant cell type in VTA, we have identified a novel VTA to ventral pallidum GABAergic pathway, and stimulation of this pathway increases motivation to work for a food reward. In parallel, we identified cholinergic inputs to the BLA that, when stimulated during cue-reward learning, increase reward responding. These studies have led us to propose the hypothesis that nicotine, via nAChR subtypes, stimulates synergistic microcircuits centered on the VTA and BLA to potentiate reward-seeking. We are also using proteomic, transcriptomic and epigenomic approaches to identify intracellular pathways downstream of nAChRs that contribute to cellular and morphological plasticity following nicotine administration that could underlie potentiated cue-reward responding.

Together, these studies go beyond initial steps of nicotine reward mediated through DA signaling to identify circuits and signaling pathways involved in the ability of nicotine to potentiate rewarding responses, processes that likely contribute to long-term susceptibility to nicotine addiction and relapse.